Observations and Limitations of Dolby Atmos for Spatial Mixing

Something to make note of when using Dolby Atmos is that out of the box for both the object-bed and the channel-bed there is a limited vector space, specifically there is from the “floor” to the “ceiling” since this is originally designed for theater based mixing. That means that when translated to a virtual setting (expectations we would have for spatial audio mixing) we face our first observed limitation, we are missing 50% of the virtual mixing space. 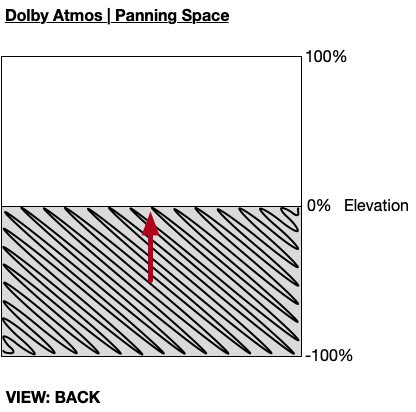 Further exploration of the designated 2x channels for elevation in the channel-bed Dolby Atmos workflows shows that we have even less of the virtual vector space available for spatial audio mixing. Any input sources panned with >0 elevation starts distributing signal to those 2x elevation channels, meaning there is very little directional isolation for any elevated sources. This seems to really derive from the fact that this system is intended for distributed loudspeaker soundsystems (in theaters), but when we use this for virtual spatial audio mixing this is a huge limitation, especially for headphone targeted content.

Having a split system multichannel format might have some advantages, however Dolby Atmos’s implementation of this seems to cause more harm than good, we find a lot of user confusion on the panning spaces of the object-bed vs the channel-bed, the UI for tools focused around Dolby Atmos tends to lead a user to believe they are different, but they seem to have the same end effect after runtime playback. We also find that having this split causes a ton of issues for developers building interpretations of playback, the fact that it is left open ended around a proprietary and unforgiving channel-bed shape, combined with an object-bed that should be more straightforward but is not, and in fact requires proprietary runtime room modeling processes; will cause a fractured playback landscape for just Dolby Atmos content.

We have seen some confusion from audio professionals using Dolby Atmos and their own developed UI, these might be minor but have cause massive loss of confidence during mixing and producing stages.

Another UX pain point we found was that while Dolby Atmos tends to follow the recommended structure of the opensource ADM but has its own written metadata that requires developers to build multiple parsers or interpreters. ADM or Audio Definition Model is a standardised metadata model for audio, ideally for any format or custom implementation that needs to further describe what each channel of audio represents (for example object audio formats). We have been working on conversion tools for all object audio formats and find this to be an unnecessary pain point by having a proprietary metadata style within the .atmos and .atmos.metadata files.

All said and done a user can expect to deliver a Dolby Atmos Master file that includes double to triple digits of audio channels, even when only a few of those channels actually contain audio data. We have found that just any object layer will require the format to zero out the entire length of the project an empty audio channel, this is a tremendous increase in file size for no benefit at all. There can be a ton of optimizations made in this field, but even if all those were applied we are still discussing a channel-based multichannel format that has more channels and less directional soundfield resolution than any other pre-rendered spatial audio format existing.

We plan on expanding on this post with file size examples compared to spatial soundfield resolution.